What Is the Biggest Snake in the World? Some 58 million years ago, a gargantuan snake patrolled the rivers of Colombia.

NamedTitanoboa cerrejonensis, the animal swims those waters no more. Experts aren’t sure why the reptile died out. Maybe climate change did this species in — or perhaps it just couldn’t compete with the big, carnivorous mammals who later arrived on the scene. 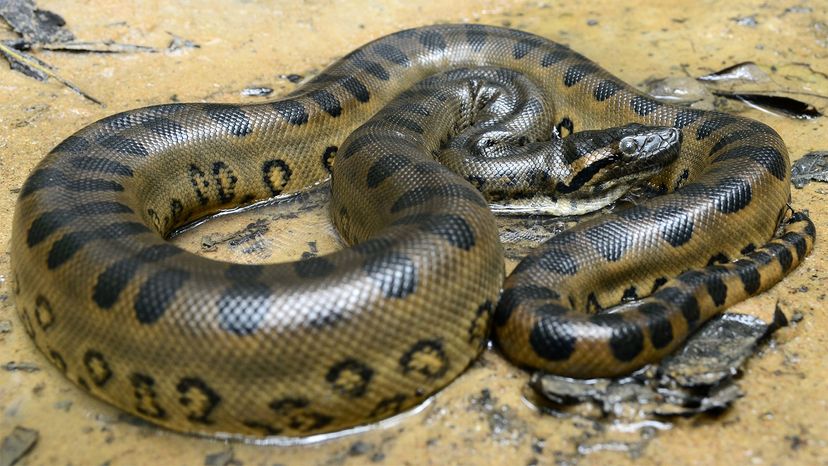 What we do know is that Titanoboa was absolutely, positively gigantic. Although nobody’s ever found a complete skeleton, paleontologists have an assortment of Titanoboa fossils to go on, including ribs, backbones and pieces of skull.

They paint a striking image of the long-extinct creature. Judging by the available remains, it seems Titanoboa could have probably weighed over 1.25 tons (over 1.13 metric tons) and surpassed 42 feet (12.8 meters) in length.

That would make it the largest known snake of all time.

But needless to say, a lot of things have changed over the past 58 million years. Today, you and I share this planet with more than 3,000 recognized snake species. Some catch live bats on the fly; some play dead; a few of them even glide down from treetops like skinny parachuters.

And in our post-Titanoboa world, the reigning heavyweight champion, the bulkiest living snake, is another South American river giant. Put your hands together for Eunectes murinus, aka the biggest snake in the world, the green anaconda.

Eunectes murinus isn’t the only anaconda crawling around these days. There are three other species on record: the yellow anaconda, the dark-spotted anaconda and the Bolivian anaconda. Adapted for a semiaquatic lifestyle in lush swamps and winding rivers, the four snakes are all native to tropical South America.

They’re also members of the Boidae family of snakes, which means that anacondas are technically considered boas. It’s no secret that many boas use constriction to kill their prey. The behavior brings to mind another well-known reptile group: the pythons.

“These are … two separate evolutionary lineages of snakes, both containing some species that are small and some that are huge,” says Richard Shine, a biologist at Australia’s Macquarie University, in an email interview. “One intriguing difference is that most boas produce live babies while all pythons lay eggs.”

Geography is another point of distinction. While boas generally live in the Western Hemisphere, pythons are Old World natives. By far, the longest snake in that half of the globe is a colorful predator called the reticulated python (Malayopython reticulatus). 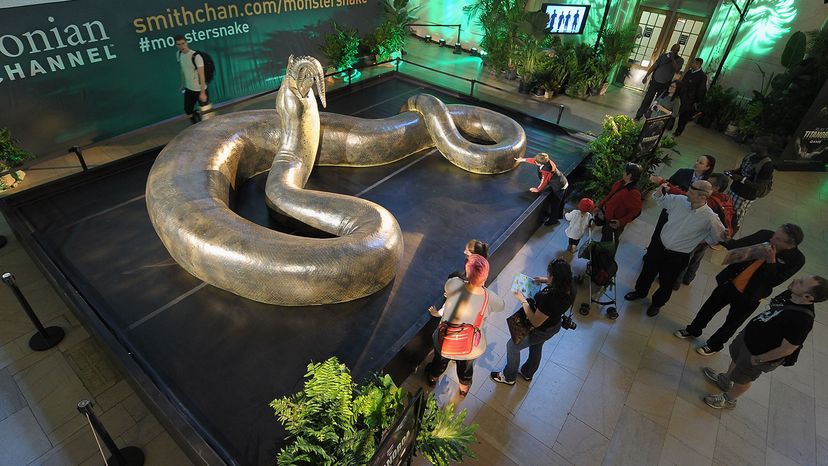 Residents of southern and southeastern Asia, reticulated pythons — or “retics” — get big enough to swallow pigs, deer — and yes, the occasional human.

Indeed, some record books say it’s the retic, and not the green anaconda, that deserves the title of “world’s biggest snake.”

Jesus Rivas would beg to differ. A herpetologist and professor of biology at New Mexico Highlands University, he’s been studying green anacondas in their natural habitat for three decades and counting.

Here’s the rub. Green anacondas are more heavily built animals than retics. Due to their hulking proportions, experts agree that the South American snakes can get much, much heavier than even the largest of pythons.

Yet when it comes to body length, reticulated pythons might actually have a slight edge. Rivas says there are records that suggest that, between the two snakes, “retics grow longer.”

“The largest [green anaconda] I have measured was a bit shy of 18 feet [5.5 meters],” says Rivas. “While I do not doubt they can grow larger, possibly 8 meters [26 feet] or more, this is far from widely accepted among [specialists].”

As for retics, Shine says he “encountered one individual female that was almost 23 feet [7 meters] long” while conducting research in Sumatra.

Another plus-sized retic — this one from the island of Borneo — was measured at 22 feet, 10 inches (or 6.95 meters) long. The reptile was described in a 2005 report published by “The Raffles Bulletin of Zoology.”

Fun fact about that snake: It ate a bear!

Somehow, a wild, 50-pound (23-kilogram) sun bear who’d been wearing a radio collar caught the reptile’s attention. The retic swallowed it whole, collar and all. Researchers later tracked the python down for examination.