‘THEY’RE STARTING TO EMERGE’: What You Need To Know About Australia’s Snake Season

‘THEY’RE STARTING TO EMERGE’: What You Need To Know About Australia’s Snake Season Relentless rain has snakes hiding in places closer to home, with experts warning of a spike in surprise encounters ahead of peak breeding season.
Australia’s snake season generally hits between September and April as they start to venture out looking for food or a mate, but this can be brought forward if the end of winter and start of spring are unseasonably warm.
Heavy rain caused by a La Nina weather system has also added another layer as snakes attempt to find cover after hibernation in schools, houses or home gutters and pipes.

“When it’s raining they’ll try hide from it and unfortunately, this is how they can actually end up inside houses, schools, or businesses, trying to hide from the rain,” Snake Hunter Mark Pelly told 9News.com.au.
Pelly has been receiving call outs to relocate snakes from Melbourne homes and properties “much earlier than anticipated”.
“They’re actually popping up in people’s backyards,” he said. 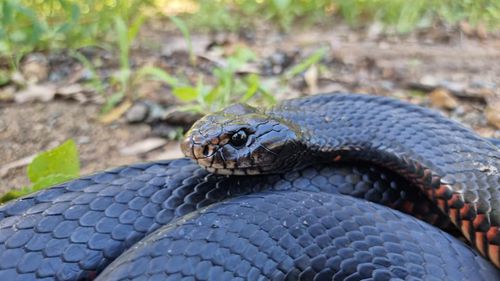 The Australian Reptile Park said an increase in sightings is expected as the weather warms. (Sunshine Coast Snake Catchers 24/7)

Australia is home to the world’s most venomous snakes, with approximately 3000 snake bites occurring each year.
Around 300 of these bites receive antivenom, according to The Australian Reptile Park and on average, one or two bites prove fatal.
Pelly has recently been encountering highly-venomous varieties in the city.
“Mostly Eastern Tiger snakes, which is the fifth most venomous snake in the world and Eastern brown snakes which is the second most deadly snake in the world.”
The Australian Reptile Park said a venomous snake bite could destroy blood cells, cause blood clots or excessive bleeding and destroy tissue.
Depending on the species of venomous snake, the bite could kill you within 30 minutes.

Snake safety
The Australian Reptile Park said an increase in sightings is expected from now on and that it is important for people to understand how to keep safe.
“Since we’re close to the start of Spring, we’d highly suggest brushing up on snake bite first aid,” a spokesperson said.

“Other things you can do around the home is reduce rubbish, timber and other scrap piles in the backyard that would create a great hiding place for a snake.”
Pelly also said rubbish was a factor in attracting snakes to cities and the surrounds.
“Snakes are one of the endemic animals in Australia that actually can thrive where humans populate.”
“Where you have rubbish you have mice and where you have mice, you have snakes,” he said.

Snakes don’t go out of their way to harm humans and most bites occur when people are trying to catch or kill a snake.
Experts recommend that if you come across a snake, do not approach it or try and catch it yourself – call your local snake catcher instead to keep you, your family and the snake safe.
Clearing yards of long grass where snakes can hide is also recommended.