When I heard they had a species as big as the Burmese python, I thought it’d be a cool idea to see if we could go and find one.” During Florida’s annual Python Challenge, a trio of amateur python hunters stumbled across a 17-foot, 110-pound python lying in the middle of the road. One of the hunters, Joshua Laquis, says it might be the longest snake ever found by amateurs in the state.

This is the second year Laquis, a business administration student at Rollins College, has hunted pythons. Although Laquis is not an officially registered participant in the 2022 challenge according to Laquis himself and FWC officials, pythons may be taken year-round in Florida. Laquis and his hunting buddies caught it within days of the state’s annual competition. The Python Challenge is a special event designed to raise awareness over the state’s invasive Burmese python problem, as well as eradicate snakes. Researchers recently uncovered the largest Burmese python to date this year, a large female measuring 17 feet, 7 inches. Previously, the biggest snake Laquis caught was seven feet long.

“I’m always looking for extreme stuff to do whether it be skydiving or paragliding,” Laquis told Outdoor Life. “When I heard they had a species as big as the Burmese python, I thought it’d be a cool idea to see if we could go and find one.”

Laquis managed to locate a record-setting Burmese python on August 5. And he did it with the help of two fellow snake hunters he met on Instagram. “I was supposed to go with friends, but that didn’t work out,” says Laquis. That left the Trinidad native scrambling as he had already driven four hours from Winter Park closer to the Everglades with python hunting in mind. Fortunately, after several hours on Instagram, he was able to locate two others interested in doing the same thing who were already in the area: Jake Waleri and Stephen Gauta of Glades Boys Python Adventures.

The trio jumped in a truck and started cruising down U.S. Highway 41, “shining light into the bushes to see if we could see anything popping out of the bushes.” They were on the cusp of the Everglade National Forest when they happened upon the monster snake.

“It was literally on the road,” says Laquis, who was shocked by the size of the snake. He told Click Orlando, “We all screamed. We all hunted snakes before, but none of us have seen anything this size … Something this big was unbelievable to see.” 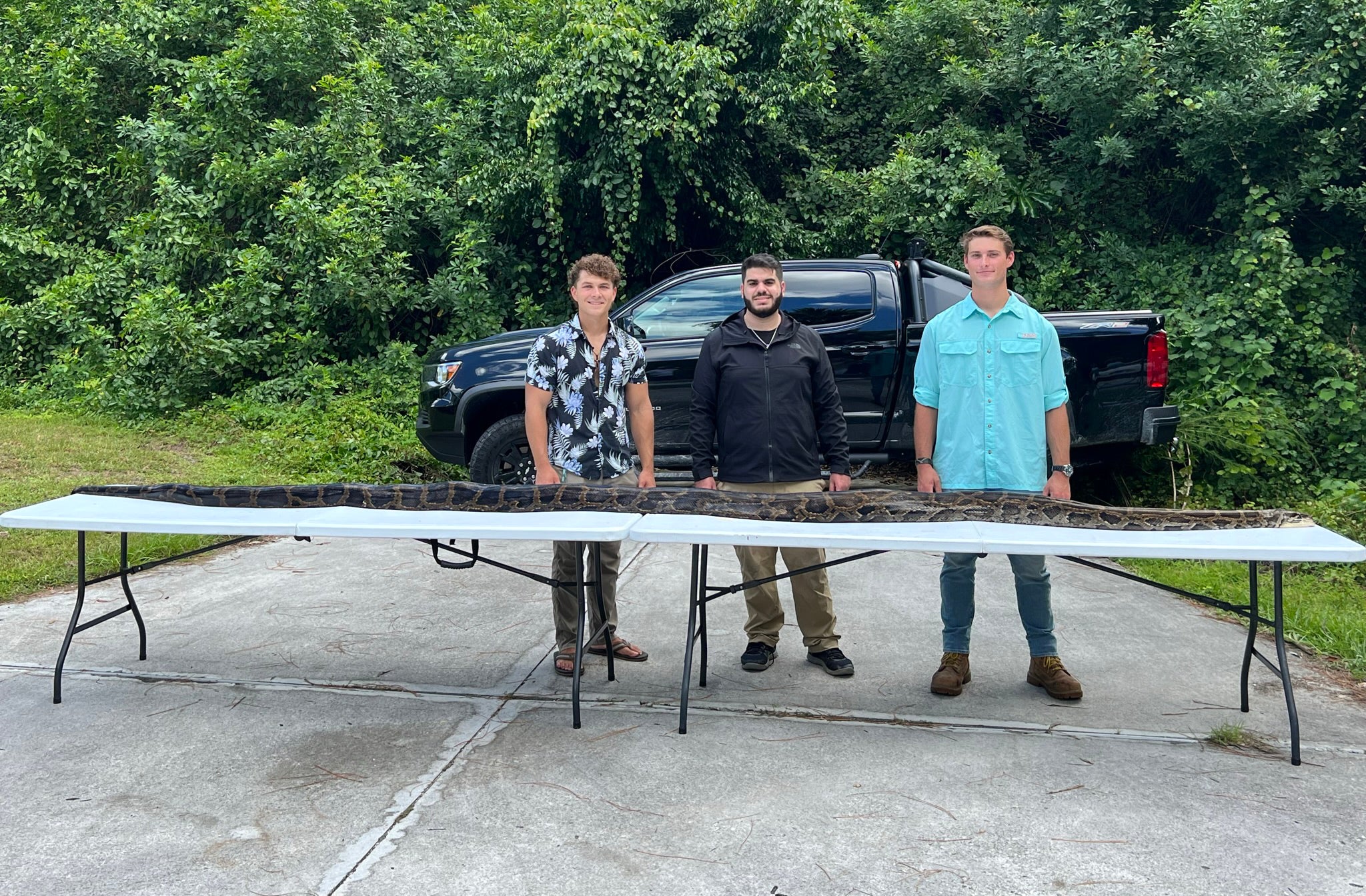 Although Laquis and his team initially measured the python at nearly 18 feet, the official measurement a few days later clocked in at a still-impressive 17 feet, 2 inches long Courtesy Joshua Laquis

The Florida Fish and Wildlife Commission holds the Florida Python Challenge each year, which offers prize money for the most pythons captured and the longest snake. Last year’s first-prize winner captured 41 pythons, and the $1,500 prize for longest snake went to someone who bagged a snake over 15 feet long. All told, event participants removed 223 invasive pythons in 2021. The event draws hundreds of professional snake hunters to the area and, as of Friday, more than 850 people had registered to participate in this year’s challenge.

The Challenge has professional and amateur divisions, with grand prizes of $2,500 apiece going to whoever catches the most pythons in each division. The 2022 Python Challenge remains open until 5 p.m. on August 14.

Florida’s Invasive Python Problem
Burmese pythons are a major problem in south Florida and are one of the worst invasive species in and around the Everglades National Park, according to the U.S. Geological Service. Not only do these massive snakes compete with native wildlife for food, but severe declines in native species are linked to these invasive vertebrates. For instance, a USGS study conducted in 2012 found that raccoon numbers decreased by 99.3 percent, opossums by 98.9 percent, and bobcats by 87.5 percent since 1997. Other mammals like marsh rabbits, cottontail rabbits and foxes have “effectively disappeared” from the Everglades—because of the Burmese python.