Ufos: Were Aliens Spotted On The Moon In Nasa’s Apollo 9 Mission Images?

Ufos: Were Aliens Spotted On The Moon In Nasa’s Apollo 9 Mission Images?

ALIEN hunters believe they have spotted a fleet of UFOs zooming past the Moon in images from the 1969 Apollo 9 mission. Apollo 9 saw three NASA astronauts blasted into the Earth’s orbit for 10 days as a test flight before the Apollo 11 mission, which saw the first people land on the Moon. Commander James McDivitt, Command Module Pilot David Scott, and Lunar Module Pilot Rusty Schweickart lifted off from Earth on March 3, 1969, before spending 10 days in orbit, completing 151 trips around Earth.

The three men landed back on Earth on March 13, just four months before the Apollo 11 mission set off for the Moon.

While the trio was in the Earth’s orbit they snapped images of the Moon, and conspiracy theorists believe they have spotted something odd in some of the photographs.

Prominent conspiracy theorist Scott C Waring has been analysing the images from the NASA astronauts and spotted what he believed to be a fleet of UFOs travelling in front of the Moon.

The supposed UFOs, according to Mr Waring, were up to three kilometres long and appear to be extremely thin. 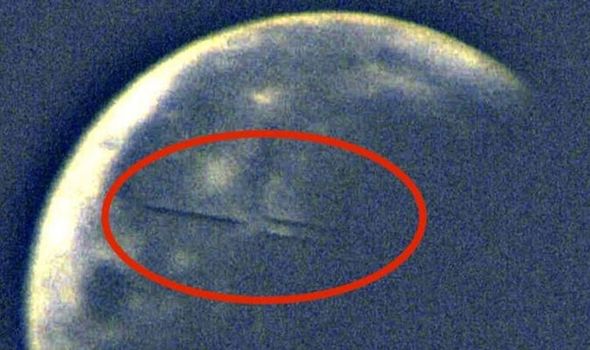 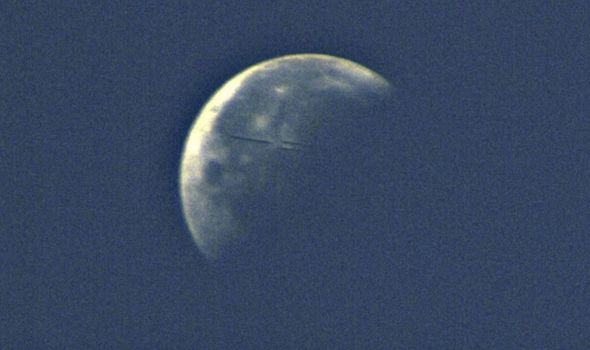 The alien hunter posted on his blog ET Database: “UFOs that were over 2-3 km long have been seen and reported by pilots and other eyewitnesses, I myself have reported UFOs in NASA photos on the moons surface that were about 10km across in comparison with the nearby crater who’s diameter is known.

“Here again are three UFOs, long and giant in size flying past the moon and recorded by none other than NASA!

“It’s a glitch, a scratch, a cheap lens on your scope, sorry boys, NASA buys only the best quality and highest performance parts for its observations, but thank you for playing.”

Some conspiracy theorists claim the Moon could be occupied by aliens and this is the reason NASA has not returned since the Apollo missions ended in the 1970s.