A bizarre sighting of a strange-shaped light floating above a hill in Somerset has sparked theories it could be a UFO.

The streak of light was caught on camera near ‘Britain’s UFO capital’ which has been subject to extra-terrestrial sightings for more than 40 years.

This new sighting adds to the list of shimmering lights and crop circles that have been reported by baffled residents over the past few decades.

The video, taken by a resident from Frome, shows streaks of light over nearby Cley hill which is 2 miles from UFO town Warminster.

The footage, which lasts a few minutes, shows the peculiar light moving in circular directions in the night sky.

‘I took this video from my house in Frome last night. It was over the Cley Hill area I think, which is always a hotspot for UFOs’, the resident who took the video told Somerset Live.

‘Probably a drone with a fancy flame effect tail or something. It’s been spotted a few times locally’, the resident said. 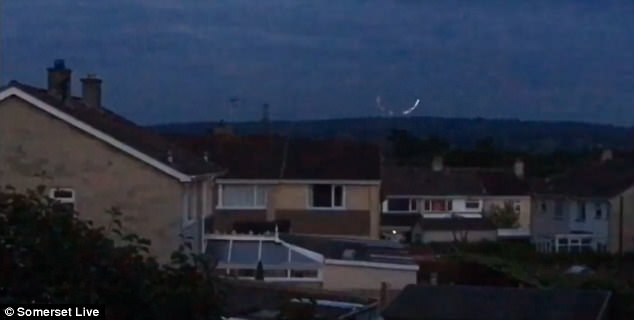 Nigel Viel, a local rambler added: ‘Some experts have gone as far as to describe the nearby town of Warminster as Britain’s UFO capital on account of a phenomena first encountered in the mid-1960s.’

On 17 August 1965 a ‘detonation noise’ rocked houses before a ‘monstrous orange flame was seen in the sky, crackling and hissing.’

‘Strange noises were heard in the skies above the town, and an equally strange shimmering light was observed in the vicinity’, said Mr Viel.